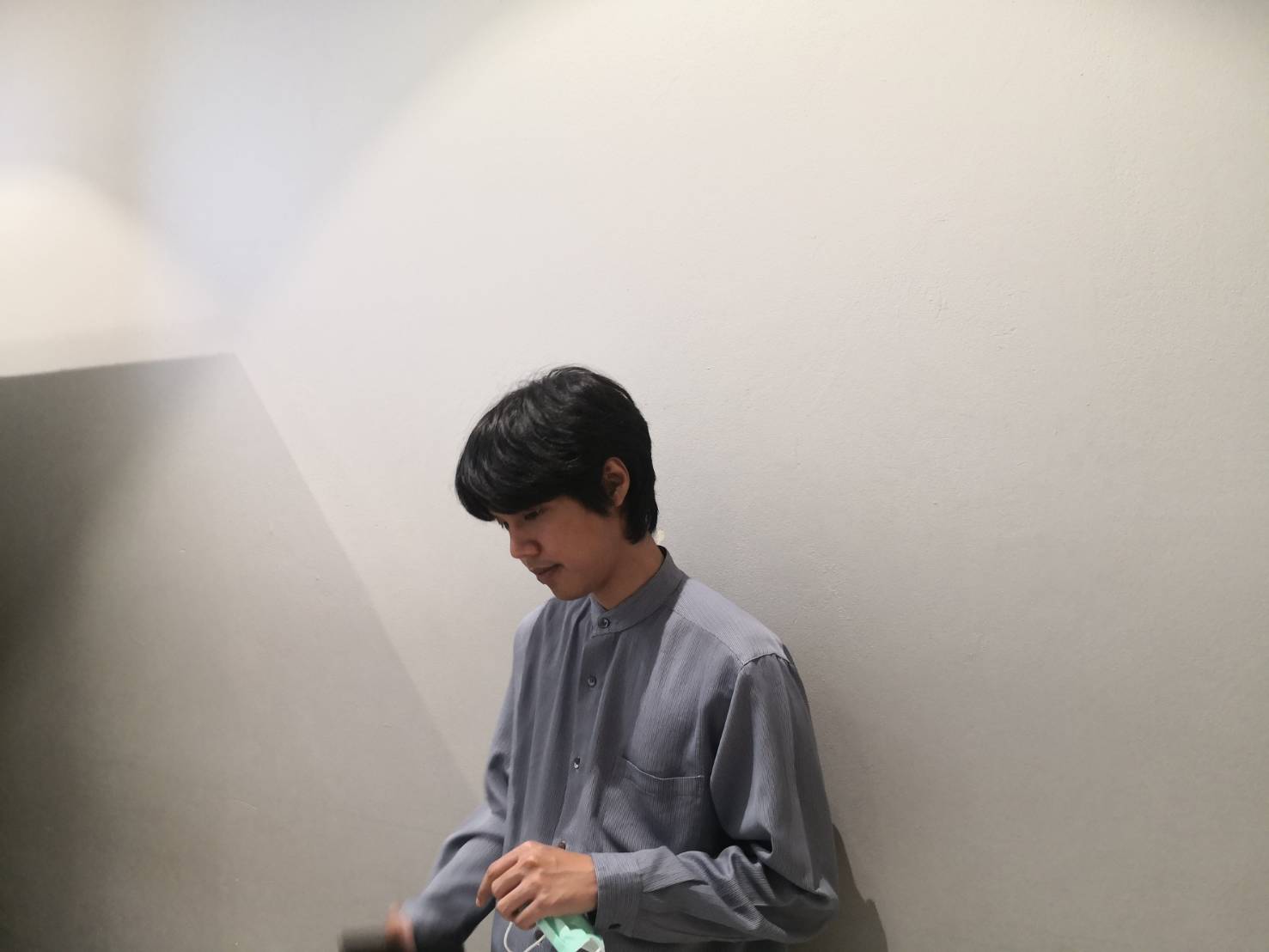 Time to time we come across with something different in music, someone different as an artist. Kawin Kornthong is indeed definitely one of them. When I play his songs, a whole new layer of the world opens up, like I was seeing it through his eyes. Just recently, he has just released “Eros”, a full concept album, combining different genres yet trying to find an own voice and style with it. If this was an LP, it would surely be in my collection. Thankfully, we could connect for this interview from the other parts of the planet. So, read and listen to his thoughts on music and the world!

And while you are at it, listen to Kawin Kornthong‘s “Rythm of Love” – it’s a nice, chill introduction to his art and music:

Kawin: It was a long and deep sleep. I haven’t had that for awhile.

Music Authentic: And what did you last cook?

Kawin: Scramble eggs, but I ran out of butter, so olive oil and milk. I am not proud of it, but it tasted great. Pretty sure I threw in some mackerel into that.

Music Authentic: So, let’s begin with the name of your new album. Why „Eros”? It does have a strong cultural suggestion…

Kawin: I picked Eros after reading Freud. It feels right for me to use the word “life” and “love” while trying to make this album. I like the idea of life force that you could feel within your own body, it could either facilitate you into having a fulfilling relationship or destructive emotions. Ah…I just find the idea very simple and interesting. Also, I avoided being too conceptual, so the word Eros here is just life, and love. It feels more fitting to center the experience towards the listeners’ inner world. Grief plays a big role in that for me personally, but I like to keep things open for the audience. They have freedom to think about the word on their own.

Music Authentic: It is described as a movie to listen. Do you find real music, real art is the one where everyone can have their own interpretation/own „movie”?

Kawin: Ah…I don’t know. Well… Eros is supposed to do that by design, but I think each person would experience it differently. For example, some of you may listen to it before bed to fall asleep without reflecting on anything remotely…you , and that is fine too. It’s great if some audience could come up with their own interpretation, yeah, that sounds fun. I have a fixed meaning of each songs in my mind, but it would be fun to hear people having their own movie. For me, these songs are both toys that anyone could play, and personal therapy that they could just sit down and feel.

Music Authentic: What made you choose this topic for your album?

Kawin: Me and Deeno (producer of Eros), we had this long period of three years after every track is done.By the time that we finished mixing and mastering, I just threw words randomly on a piece of paper, Eros was picked because I like the sound of it.

Music Authentic: There are vibes of jazz, blues, rock, electro, experimental in this album. Do you like the full spectrum of music?

Kawin: I enjoy music that makes me feel, and music that make me think. I am not sure whether or not I enjoy the full spectrum of music though…Ah… I love Maurice Ravel, Jon Brion, David Bowie, Radiohead, Fiona Apple, Sparklehorse, and Emily Haines though. They are pretty cool.

Music Authentic: One of my favourite from you is „Water” from you previous album – and that’s an 8 minutes long track. It seems you kept your habit with atypical song lengths in „Eros”, too…

Kawin: Water was a soundtrack for a documentary that I did back in my undergrad years. My professor said longer songs would be easier for those poor editors in the team. Although I like to write long and slow songs, I am also afraid that some songs would get too long in Eros. Well, I am afraid that this could turn into a bad habit in the future.

Music Authentic: I know that your music is described as „horror score” – but this one is more of a contemplative approach to the human soul, almost like an ode to the human side of what or who we can be…

Kawin: I would jokingly tell my friends that it was like getting in the “time tunnel” to visit your past feelings, or past trauma. There are feelings that you are afraid to experience, and also feelings that you wish they stay forever, and I love the idea of letting people feel those simultaneously for awhile. It’s like excercising, but…you know…with your emotions.

Music Authentic: How long did it take to write from start to finish? What was your songwriting process?

Kawin: For Eros…ah…I remember that each song takes no more than two days to write. Rhythm of Love took me about an hour or two to write. The process is different in each song, but all of them share one process. It is what I call “put nonsense together” until it makes sense. I would play, and write stuff that feels separated from one another, and put them together until they make sense as a whole.

(this is the cover art of the Kawin’s album “Eros” – be brave and read on, since the interview has a second, interesting half, too!)

Music Authentic: Obviously, the world around us has changed significantly. Has it affected your release?

Kawin: I’m glad that my releases in the past have always been underwhelming, so I have little to no pressure about releasing Eros at all. This is certainly a freedom I get from being too niche for Thai market.

Music Authentic: Do you plan to play this album live in front of an audience online or offline?

Kawin: I would love to perform these songs in front of other people. I have no actual plan for now though, just an idea of playing at a friend’s place.

Music Authentic: As I know, you are also a psychologist. Is music an outlet for you or by now the mainstream of your everydays?

Kawin: I write music as a hobby. Um…it’s been about 8 years since the first radio release. If I stop writing music for awhile, I would feel really bad, like I am doing something wrong. I feel guilty if I stop doing it. I mostly write when I’m in a bad mood, and stop doing it for awhile also make me in a bad mood. I think music has always been a part of my life, even before my training as a counseling psychologist.

Music Authentic: You sing in English. How do you see, is this the ultimate language of the songs?

Kawin: It depends. Thai lyrics are fun to write sometimes. I find that writing Thai lyrics for other indie band is very satisfying. I had a blast writing “Travel” for Beagle Hug. As for my songs, English is much more comfortable to write.  As Thais, we have this crazy writing system that includes tone, and changing melody also changes the meaning of the word. That’s probably why English is my first choice. It’s more difficult to write a good Thai lyrics, and it feels comfortable for me to write in English.

Music Authentic: Did you really go full method-acting for „Rhythm of Love”?

Kawin: Not full-blown method acting though. Before writing Rhythm of Love, I kinda… locked myself in the room as much as possible, thinking negatively about the world, and convincing myself for awhile that society will be doomed by our herd-like mentality. It’s a pretty psychotic thing to think repeatedly… Then later, I tried to focus on positive feelings on the piano, then improvise both music and lyrics. I am not confident enough to call that “method acting” though, since I am terrible at acting…
I think there are weirder process in writing Snow in a Bottle, and Grow Up. Snow in a Bottle was a song about an alcoholic who was left by his family, so I kinda…abuse alcohol heavily for days, until I feel so useless, then I started writing. Grow Up has this strong suicide theme, so I would walk on a bridge and keep staring down into the river, imagined myself jumping down for awhile. All of it is pretty safe though, I just make myself feel very, very bad. Looking back with more experience now, I am very embarrassed of doing those actually. It’s like… “Ha! You fool! You could have written those without doing weird stuff in the first place!”. It’s pretty cringy looking back at myself three years ago… Man… What’s wrong with that guy?

Kawin: Hatred in the World Also Love has a very special place in my memory. It is probably the only song in Eros that I don’t write out of misery. I remember the feeling of accepting who I am while playing that song. Perhaps “love” is that feeling of being accepted by myself or someone.

Music Authentic: You are really from a young generation, for you the future is already here. Would you be a part of the Mars missions?

Kawin: It sounds so lonely, and expensive… So I’ll take my chance with Earth. I wouldn’t want a life with no animals contact. Birds, dogs, cats, snakes, even allegators…

Music Authentic: And what about superheroes? Which one would you rather be in real life and on screen?

Kawin: The DC version of Lucifer. Just to own a bar and the grand piano forever. Also I could even fly out of existence if I am too bored. How convinient is that!? The only downside is his immortality though… I would hate to live forever and have my dad constantly contact me indirectly through unclear communication.

Music Authentic: Your generation inherited a ruined world with the very same misogyny and self-indulgent ignorance that made this Earth of the obnoxious masses. How hopeful are you for the future? Can your generation really make a lasting difference for the greater good?

Kawin: I am hopeful for the future to some extent. Being pessimistic about society and its people can be a good way to distract myself from my own issues, but I think people have the capacity to change and grow. Maybe not all of them, but most people have that. I don’t believe that my generation is going to solve more problems than previous ones. My only hope for our generation is that we could find a way to have kinder society.

Music Authentic: What do you think the greatest challenges are now in the world? With what would you start to make it right first?

Kawin: Ah… I am thinking small right now, so I only wish Thai independent artists to have more platform. We have a lot of great artists here who get no chance to perform at all. Perhaps we could have live house culture in the future, like in Japan, but now it’s pretty grim. I am not speaking for myself, since I decide to do this as a hobby,but there are real artists who are probably more talented than me, who can’t even pay their bills. It feels wrong to live in this kind of environment.

Music Authentic: What’s your encouraging message for your readers and fans, fellowmen?

Kawin: Thank you for your patience in the wait of Eros. Please stay safe in this crazy time. Don’t forget to get some sunlight, drink water, get some sleep, and wear your damn mask!

Music Authentic: Thank you for being with us today!

This is Kawin Kornthong’s Twitter page, you know what to do…

Listen to Kawin Kornthong’s songs on Spotify by clicking here

Winchester 7 & The Runners – Ever Said

Van Hechter – I Am